Louisa shares her experience of our new online preparation groups!

My husband and I were a bit apprehensive before the Virtual Prep Course. We hadn’t met any of the social workers in person or any of the participants either! We needn’t have worried though. One of the social workers arranged a Zoom meeting with us the week before the prep group, just to introduce herself and let us know what to expect. We were immediately put at ease as she was so easy to talk to. She admitted that they were also anxious about delivering the course in this way as it hadn’t really been done before and, let’s face it, none of us really enjoy seeing ourselves on screen!  (Especially with lockdown hair!)

Before Session 1 we were sent some work on Google Classrooms. This involved a slideshow, some films to watch, materials to read and some short questions to answer. We were anxious about answering the questions but we were reassured that none of the Prep Course is assessed. It’s an opportunity to reflect on issues that you might not have considered before and to explore a range of approaches to parenting children who may have had adverse childhood experiences.

A WhatsApp group was set up for all the participants of the Prep Course so that we could get to know one another before the course started. This was very valuable as we felt like we knew a little about some of the others on the course before meeting them on Zoom. Our group was comprised of several couples and one single adopter. It was led by two social workers and an adoptive parent.

We logged onto zoom for our first Prep Session and it was great to put faces to the names in our WhatsApp group. Everyone was really friendly and we started to feel more relaxed about things. During the first session we had group discussions about the materials that we had covered in Google Classrooms. Some of the discussions were as one large group and for other we broke into individual ‘virtual’ rooms so we could work in smaller groups.

Session 1 covered a wide variety of topics including; exploring the Adoption Process, secure and insecure attachment styles, responding to Case Studies of ‘looked after’ children, hearing some personal experiences of adoptive parents and also exploring the range of post-adoption support that is available through Scottish Adoption.

Hearing the stories of other adoptive parents was really beneficial for us. It was great to hear accounts  from ‘real’ people about what the adoption experience was like for them from the beginning through to having their child/children placed with them.

We were also really intrigued to hear about the post adoption support that is available through Scottish Adoption. We hadn’t realised that Scottish Adoption offer so much support to adoptive families, such as social worker input, family days out, group sessions for children of different age groups and theraplay sessions as well. It was very reassuring to know that the post-adoption support would be ongoing if we needed it.

We were both quite tired after Session 1 as it was two hours long, we were meeting new people and also hearing lots of new information all at the same time! It worked really well though and it was great that Scottish Adoption managed to make it all happen. It enabled us to continue to move forward through our adoption journey, albeit with a slightly alternative approach!

We were sent our ‘homework’ ahead of Session 2. This week we looked at a continuation of our case study, and watched some films recorded by teenagers who were adopted through Scottish Adoption. They teenagers were called ‘ Adoption Ambassadors’ and it was really helpful to hear how the adoption process was for them and listen to them express their thoughts and feelings about it.

We also listened to some podcasts and discussed different levels of contact with birth family and the benefits and challenges of this contact. It was interesting to hear from the teenagers whether they felt that contact with their birth family had been a positive experience for them. We also explored the topic of Adverse Childhood Experiences and how these early childhood experiences can affect a child who is a placed for adoption.

This week’s Zoom session was very similar to week 1. There were a number of Group discussions as well as time splitting off into smaller groups as well. We felt much more comfortable talking with the group this week as we had really got to know each other during the previous week.  I think the whole group was feeling a lot more relaxed!

Before Session 3 we were sent some material on Google Classrooms about ‘theraplay’. It was interesting to learn about play activities that can be used to increase closeness and bonding between the child and caregiver. We discussed child development and the PACE approach when parenting children who have experienced grief and loss. We explored some situations and discussed how we would use PACE [playful, accepting, curious, empathetic] to respond to the needs of the child whilst also regulating our own emotions. We also discussed the next steps in the adoption process and what would happen in terms of proceeding forward to the next stage.

By the end of Session 3 we were actually quite sad that we weren’t going to be having any more Prep Group! Due to the nature of the discussions we had learned a lot about the other people in the group and we felt close to them even though we had never met any of them in person. We were all going through quite similar journeys and it had been such a lovely opportunity to spend time exploring our thoughts and feelings with other people who had been through similar experiences.

The two social workers running the course were amazing. They were so easy to talk to and no question was too silly for them to answer! They made us feel so comfortable. Having an adoptive parent in the group was really helpful as well as she was able to give us her personal experience about the process and things that she found beneficial.

The team from Scottish Adoption were fantastic throughout the entire process. They got in touch between Zoom sessions to see if we had any questions and to check if we were ok. Some of the material can be quite emotional and can remind you of aspects of your own childhood so it was great to have this ongoing support as a safety net between sessions.

We were encouraged to ask questions between sessions, during sessions, at any time, and we were always reassured that no question was too silly to be asked.

By the end of the course we also felt much closer as a couple. We had explored such a wide range of material, talked about memories from our own childhoods and also had many discussions about how we might develop our parenting style together as a couple. This really  helped our relationship to grow and we now feel much more confident going forward to the next stage of the adoption process.

Senior Practitioner Sarah talks us through how Sottish Adoption had to quickly adapt a Preparation Group that was already running but had to change due to the lock down restrictions. 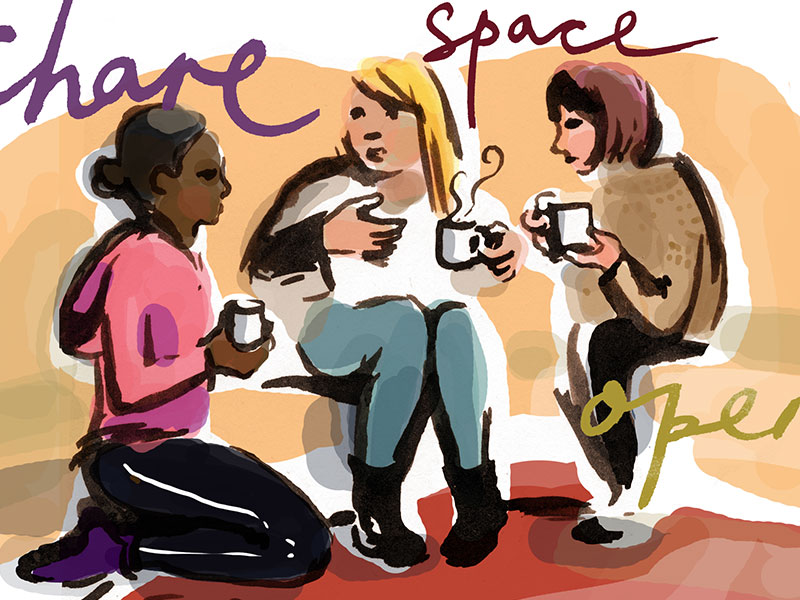 We started our latest prep group at the beginning of March. It was a big group with seven couples attending. Ciara and I were the social work facilitators from the Family Placement Team and we were joined by the very experienced and capable Lynsey, who is one of our Parent Practitioners. The group started as normal, everyone’s a little bit cautious and nervous in the first week and I don’t just mean the prospective adopters! It went well, there were a few laughs, chatting and good questions asked, every came back for week two so we did something right.

In the run up to week two we were starting to get concerned about Covid-19 and what that might mean for the group. We were beginning to think about how we could do things differently and make it safer for everyone. So week two went ahead with individual sandwiches and non touch theraplay games, which is much harder than it sounds! However we got there and there were more laughs, especially at the “beans” game I made everyone play, while we let Ciara cover the serious stuff!

By now we knew that week three couldn’t go ahead together, in real life, so we needed to get imaginative. And we did! Ciara and I managed to record our presentation for week three without an audience. This was an interesting experience, it was odd presenting to a camera, but we had started to get to know the group so it made it easier knowing who we were chatting to. It was a lot quicker than if we had presented to the group because we didn’t have the insightful and thoughtful questions that prospective adopters bring. We as workers are very familiar with what we are discussing so sometimes we can think we have explained something well but actually we need to add more, give better examples or just chat it through further together, so this element was missing. One benefit for the prospective adopters was that they could stop and start the presentation as much as they wanted and go back to it if it didn’t make sense.

So that Saturday, Ciara, Lynsey and I got together in the office, this was just pre lock-down, and facilitated a Zoom discussion of the presentation and all the clips we had guided them to. This again was a new experience, one in terms of ensuring the technology worked without a hitch, which by and large it did. We tried to do an interactive activity, which again did work, but being new to this medium we perhaps didn’t give enough time for the sound lag. Overall it worked and the feedback was positive.

While we three were altogether we recorded the final session. Again, this was a slightly surreal experience, made even more so by just having finished chatting with everyone. Again we went through our presentation and again, missed the interactive nature of it. However we were confident that the prospective adopters would ask us questions, either directly, via the whatsapp group or by email, to be discussed at the final session.

The final session was on Saturday again via Zoom, this time though all us facilitators were at home. It is a strange part of video conferencing that you get invited into people’s homes and them yours which is unusual and a privilege. The final session was also a success and we thought that we all felt a bit more comfortable with the medium, in addition we had had another week of chatting via the whatsapp which helped everyone feel more comfortable and familiar with each other. The group bonded well and this could be due to a number of factors, being in a group of people who are all exploring adoption, all going through a pandemic together which has brought many communities together in new ways, and having these additional contacts through whatsapp and Zoom, not just the face to face group.

As facilitators we are really pleased and proud that we were able to ensure that this group finished their preparation through these uncertain times. We have all adapted to video meetings and they will be able to start their homestudies this way too. We hope that we can take the learning from this experience to enhance and develop the groups going forward, perhaps to increase accessibility to our groups, to facilitate groups in different ways across our service and to continue supporting people in their adoption journey during these unprecedented times.